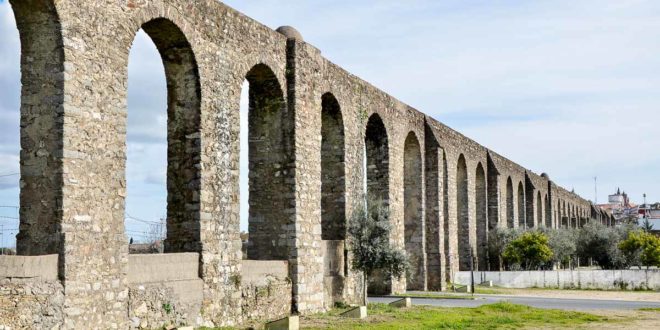 Agua de Prata Aqueduct in Évora (Aqueduto da Água de Prata) is, for its size, one of the most impressive monuments in the city. It doesn’t let us forget the ingenuity required to provide the people in Evora with water since ancient times. For that and other reasons, it is considered a Portuguese National Monument since 1910.

The construction of Agua de Prata Aqueduct was started by King João III in 1532. Under the direction of the royal architect Francisco de Arruda, 11mi (18km) of aqueduct were built starting in Divor estate, where it gets its supply of water, to the centre of Evora.

The piping and granite arches in Renaissance style were most probably laid over the old Roman aqueduct. Finished in 1537, the inauguration of Agua de Prata Aqueduct was a great ceremony held in the presence of the king and his court in Giraldo Square, where a marble fountain with lions was built, as well as a Roman triumph arch (both replaced later in the remodelling of the square. Where the lions fountain once was, we can now see the Giraldo Square fountain.

But this aqueduct still had other parts that, apart from the obvious function, made the historic centre of Evora even more interesting. Until 1873, there was a beautiful Renaissance gantry called Fecho Real do Aqueduto (Royal Finishing of the Aqueduct) near São Francisco Church.

In Rua Nova (New Street) a Renaissance style Water Box was built. Nowadays it doesn’t have all sides visits anymore but you can still see it, with all its 12 Tuscan columns.

Some of the most obvious alterations in Agua de Prata Aqueduct throughout the centuries were the several fountains added along the passage in Evora historic centre. These received their water because of gravity. Examples of additions are Portas de Moura fountain, the one in Giraldo Square, in Portas de Avis, in Chão das Covas and the fountain and tanks in Rossio de S. Brás.

In the 17th century, it was necessary to restore the aqueduct due to the Guerras da Restauração (Wars of Succession and Restoration). Other construction works occurred in the 19th and 20th century but they didn’t change the general original drawings.

The most recent intervention in this monument was recently made, when this Evora nature trail was created and the fields on either side of its whole extension were cleaned. The

The Percurso da Água de Prata (Agua de Prata Walking and Cycling Route) follows the aqueduct during 5.1mi (8.3km) through cork oak forests and farms. On foot or on bike, you will be able to breathe the pure Alentejo air with a view over Evora on your back. And coming back is going to be even better.

What those who want a shorter route have to do is follow Agua de Prata Aqueduct starting in Porta da Lagoa (R114-4 road Evora-Arraiolos) into Evora historic city centre. Here, the houses have become one with this 16th century construction. Don’t lose track of the aqueduct. See where it leads…

Previous When to visit Evora
Next Evora Town Hall