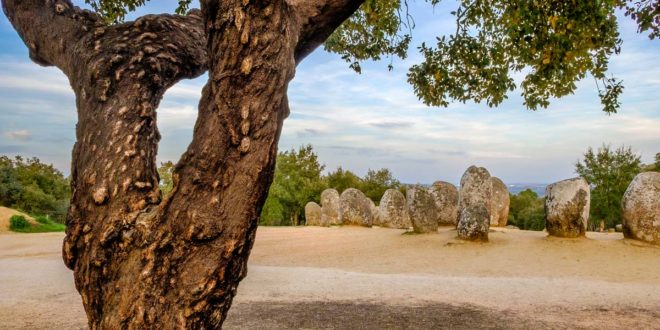 Almendres Cromlech… There are few places with such a powerful mystique that not even time itself can change. The Almendres Estate, located in the parish of Nossa Senhora de Guadalupe, proudly holds one of these rare monuments. One from magical old forgotten times. It plays with our imagination and transports us to its origins. A living memory which awaits you near Evora and is known worldwide.

Approximately 7,000 years ago, during the neolithic period, the Iberian Peninsula witnessed the progressive sedentism of its peoples. From hunters who followed seasonal migrations of their preys, human beings started to cultivate their own lands and breed their own animals to shepherd and eat. So, populations with safe roots and well-defined personalities started to grow. They were different, according to the places where they settled and the traditions which they gradually developed.

The Cromlech of Almendres – from prehistory until today

The Almendres Cromlech is a clear reflection, and one of gigantic proportions, of the era of pagan enchantment, known as New Stone Age. Built towards the sunrise and sunset, this megalithic enclosure (mega=big; litho=stone) is located on a gentle slope on Almendres Estate. A place that could very well represent Alentejo.

Formed by two distinct enclosures, built between the end of the 6th and the 3rd millennium BC, this cromlech is one of the biggest and most important megalithic monuments in the world. It is much older than the famous Stonehenge. At its peak, the archeological complex of Almendres Cromlech would have more than a hundred monoliths, granite stones of various sizes. All laid in a circular or elliptical shape. Out of the hundred, ninety five are left today, in perfect state of conservation. And you can visit them every time you feel like it.

The Cromlech of Almendres was erected in 3 stages. The 3 concentric circles of monoliths shaped like an egg go back to the Early Neolithic. The complex of 2 irregular ellipses was built during the Middle Neolithic. In the last part of the Neolithic period, both enclosures were modified into the shape they still keep nowadays.

Although the monoliths mostly have an oval shape, there are many megaliths (bigger stones) with a phallic form. One of these lifted stones is huge. Intimately connected to the cromlech, but isolated from it, this stone is called Almendres Menhir. During the summer solstice, when seen from the cromlech, the Almendres Menhir points to the sunrise.

Although the true function of the Cromlech and the Almendres Menhir is not clear, the strong bond they both have with agriculture and herding seems to be undeniable. One of the most important historians in Portugal, the late Professor José Hermano Saraiva, believed that the impregnating of the earthly womb with stone phalluses was some sort of cult to the fertilisation of the earth with cultivation in mind.

The Menhir and several other erected stones of the Almendres Cromlech have embossed decorations which also remind us of ploughing and cattle raising. These are called crosiers, in other words, engravings shaped to look like a shepherd’s cane. Other predominant engravings on the menhirs of this monument are wavy and radial lines, circles and dimples. Today, the menhirs are all numbered. The must-see decorated ones are number 5, 13, 48, 56, 57, 58, 64 and 76.

The Cromlech of Almendres was discovered in 1964 by the investigator Henrique Leonor Pina, while he was working on the Geologic map of Portugal. In Portugal, it was classified as property of public interest in 1974, being the largest enclosure of menhirs in the Iberian Peninsula. In 2015, it was reclassified as a National Monument. Today, it is part of the Megalithic Circuit in Evora and Alentejo.

Surrounded by an aura of mysticism and enchantment, the Almendres Cromlech is a true time machine. Walking through the menhirs is going back to a simple and peaceful period, the era of the druids and bonding with nature. Come alone, as a couple or with your family. Come to Almendres Estate and enjoy a serene and reinvigorating day immersed in history.

Tour suggestion
If you wish to visit the Almendres Cromlech and Menhir but don’t have a car or prefer to fully understand the monument onsite, join us in our Megalithic Tour.
Stay at Vitoria Stone Hotel

In Vitoria Stone Hotel, Evora, decoration and services are all inspired in Alentejo heritage. This includes, of course, the megalithic monuments and the amazing cuisine.

Tags History Monuments Routes What to do

Previous Estremoz – visit the historic white city in Alentejo, Portugal
Next Arraiolos – visit the village of rugs and the circular castle