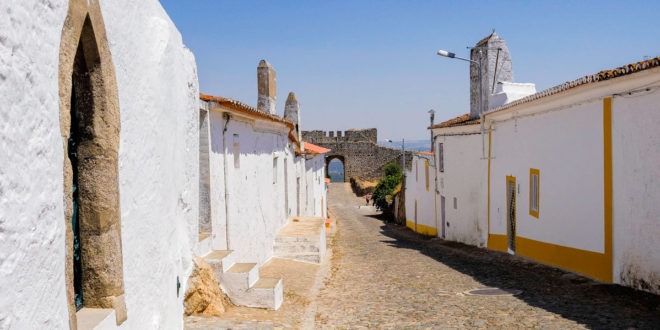 Evoramonte – history of Portugal in an Alentejo castle

The picturesque and delightful Evoramonte (or Evora Monte) parish is located between the beautiful cities of Evora and Estremoz. Once of big geographical and military importance, this Alentejo village with walls which still protect its residentes on the mountain top feels like an old warrior who patiently waits visitors. With numerous stories to tell them.

Clearly divided in two very distinct parts, Evoramonte puts together the present time of the lower area with the medieval village on top of Serra d’Ossa. Although its history goes back to prehistoric times, this unusual Alentejo village had its first known moment during the 12th century.

Around the 1160s, the Reconquest of Portugal from the Moors was happening. The Alentejo region was one of the most difficult for King Afonso Henriques’s troops to take over. It was exactly in this period that Geraldo Geraldes, known as Fearless Geraldo (yes, the one whose name is in Evora’s most central location, Giraldo Square), suggested the king that he was the right man to help him take back the lost Alentejo lands from the Saracens.

Fearless Geraldo, just like the legendary Robin Hood, was the leader of a group of raiders and outlawed. He became a key figure in the conquest of Evora, Evoramonte and nearby villages from the Moors. His endless courage made him a legend to this day in both Alentejo and Portugal.

Evoramonte had its first charter in 1248, renovated by King Afonso III in 1271. However, the difficulties in establishing a permanent population wishing to live here seemed not to go away. So, with the purpose of making Evoramonte inhabitants feel protected and wanted, King Dinis ordered the fortification of the medieval village in 1306. Although the wall has suffered some alterations throughout the centuries, a lot of it is still original.

On the wall around Evoramonte you can see the four original doors. Porta do Freixo (Ash Tree Door), with its gothic arch and flanked by two cylindrical turrets, shows the inscription referring to the beginning of the wall construction. Porta do Sol (Sun Door) is similar to the Freixo one. Porta de São Brás (a saint), oriented towards the hermitage with the same name, still has its trunnions (fit for the canon axis). Porta de São Sebastião (another saint) gives access to the road that takes us to São Sebastião Hermitage.

Going up Serra d’Ossa, towards the fortified village and Evoramonte Castle, you will notice the dominant and imposing way the wall entwines with the hill, forming a highly effective military set of constructions. The castle itself, built on one of the highest points in Serra d’Ossa, also goes back to the reconquest of Fearless Geraldo. It is an architectural achievement different from many others in its time. The Fortified Palace was made from the reconstruction of the original castle, after the earthquake of 1531.

Under the guidance of masters Diogo and Francisco de Arruda and the patronage of Duke Jaime of Bragança, the Palace, of Italian inspiration, is one of the Portuguese military architecture gems. On arrival, you will immediately see the four circular turrets laid on a square perimeter. It will be impossible not to feel marvelled by this construction made of stone masonry and granite with extraordinary stone knots which intertwine in the middle of the four Palace walls.

The clean and not so adorned style reminds us of its main function, the defence of the village, with cannons and shooting gaps strategically positioned. Inside, the Palace has dome ceilings anchored on stone pillars.

Gradually, over time, the village lost its military importance and administrative power. It had an extremely relevant role in the History of Portugal, for the last time, on May 26 1834. This was when the signature of the Convenção de Evoramonte (Evoramonte Convention) occurred. The document would put an end to the Guerra Civil Portuguesa (Portuguese Civil War) that had started in 1828.

Fought between the Liberais (Liberals), Queen Maria II’s supporters, and the Miguelistas, King Miguel I’s supporters, the war would come to an end in the Alentejo lands near Evora. Former King Miguel, aware of his eminent defeat, settled in Evoramonte municipality with his advisors. Later, he surrendered here abdicated to the throne of Portugal.

The historical attraction and the natural beauty of Evoramonte still today maintain the force and fury of the past. Evoramonte is a village which proudly displays its scars and unshakeable foundations because its character was forged from iron, blood and fire, reconstructing itself after every attack. So, embrace the warm Alentejo weather and come listen to the stories that Evoramonte has to offer you in cold breeze whispers.

Like in other Alentejo villages, e.g. Marvao and Monsaraz, Evoramonte practically stopped in time. Getting to the top can be a challenge if you go on foot but that desire sinks in the boldest when they see the castle from the entrance of the village. For those who come from Evora or Estremoz.

If you decide to go up by car, park it outside the walls near Porta de São Sebastião. This way, you will be able to enter the village like the Portuguese have done over the centuries. The place is small but beautiful and unique. Its size is a good reason to go through every street and corner paying attention to details. They come up everywhere in Evoramonte: an ornament, a door or window in Alentejo style, an inscription on the wall, a lazy cat resting on a strategical spot,…

Wherever you walk in Evora Monte, you will find simple white houses traditionally painted with white lime. And, many times, exhibiting the typical skirting boards near the ground, windows and panels. Of yellow and blue colours, Alentejo style.

Walking around the whole area inside Evoramonte walls, you will see the Igreja Matriz de Nossa Senhora da Conceição (church) near the cemetery. In Misericórdia Street, wider and where the access to the cistern is, a few benches invite you to have a break.

Closer to the walls, here, like in any other part of the village, the distant horizon reminds us why the defensive castle was built in this location. Further ahead is the small Igreja da Misericórdia (church) and the connecting Hospital da Misericórdia. But the obvious highlight in Evora Monte is the Tower, the ducal palace, at the highest point of the hill. A walk around it is surely worthwhile before you get in.

Right in the heart of this small historic village, The Place at Evoramonte is a small guesthouse with a lot of character, lovely hosts and amazing views over the fields from the rooms and its café. Use it as your base to explore the region. Have a break from your trip!

On the main street (Santa Maria) you can see the house where you can take your souvenir from Evoramonte (apart from the photos, of course). It is called Celeiro Comum (Common Granary) and dates back to 1642. That was when it was founded by charter from King João IV after the population requested it in order to have cereals stocks. Nowadays, it houses an extremely good taste handicrafts shop.

The shop sells items that symbolise Portugal, as well as many more traditional to the region and the original ones from this house artisans. Whatever you choose to buy, seeing your own piece of Alentejo handicrafts in your own home will make you wish to come back to Evoramonte again. See you soon around these parts.

Near Evoramonte, go for a 4×4 tour or hike in the middle of the cork forest or enjoy a unique experience of olive oil tasting with a small award-winning producer. There’s so much to do besides relaxing in your visit to Evoramonte!
12 Shares
Share10
Tweet
Pin2
Share