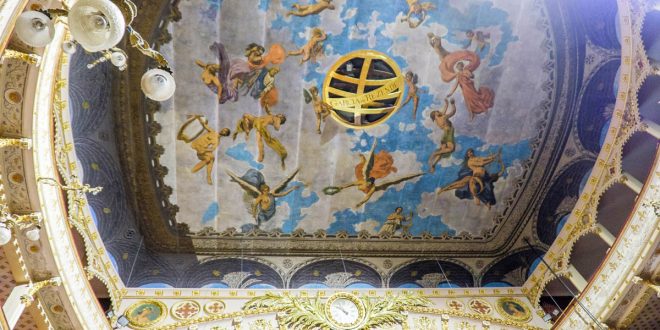 Teatro Garcia de Resende is a theatre with a name which honours a Renaissance important figure in Portugal (born in Evora) who was a poet, a chronicler, a designer and an architect. It is one of the best representations in the country of what we can call “Italian-style theatres”.

José Ramalho Dinis Perdigão, owner of Garcia de Resende Theatre, started its construction in October 1881. Like it happened with many other theatres in the 19th century, the elites made the construction happen. The objective: decrease unemployment and crime rate.

The death of the “creator” of Garcia de Resende Theatre, in 1884, slowed down its conclusion. Only in 1890 was the building construction concluded, thanks to Dr. Francisco Barahona, man of refined and cosmopolitan tastes.

The inauguration of the theatre occurred on the first day of June 1892, with the play “O íntimo”, by Eduardo Schwalbach, played by the famous theatre company of D. Maria II Theatre. King Afonso himself watched this play.

Later, in the 20th century (1941) some bad weather destroyed the roof of Garcia de Resende Theatre and the rough Winter ended up damaging some of the paintings. As if that was not enough, during the restoration, the leaded inner coating was stolen, leaving the theatre without thermic or acoustic isolation.

Two years later, in 1943, Evora City Hall rented the building as a theatre and a cinema. The “problems” of the theatre continued. Part of the house in front of the stage lost its original characteristics, with the authorisation of the City Hall, and the main facade also lost its original layout when the intervention works were made, in 1969.

Years later, the building was even used to dump garbage. Fortunately, in 1975, it was occupied by the Centro Cultural de Evora (Evora Cultural Centre). Today, it is run by Centro Dramatico de Evora, CENDREV (Evora Drama Centre).

This is truly a building of great architectural beauty, although the facade doesn’t quite show it. So, when you come to Evora, if you are allowed on that day, don’t hesitate to get in, contemplate the magnificent paintings and (why not?) sit down inside to imagine yourself as a spectator of a great theatre play. You won’t be disappointed.

Speaking of architecture, the main facade, once made of pink marble and decorated with motives of plaster and laced iron, was replaced by one made of granite. The style of the theatre changed completely.

Enjoy the hall, where you can see classic figures of Music, Dance, Comedy and Literature painted by João Vaz in oil panels. You can also see the names of all those who participated in the decoration of Garcia de Resende Theatre and a medallion with the picture of Dr. Francisco Barahona and his wife Inácia Fernandes de Barahona.

Still on the hall, there is a bar on the left. On the right, we enter the reception area, once the cloakroom. Near the side door, apart from the box reception area, you will find the access stairs to the third floor of boxes and the gallery.

In the main room… Wow! The Baroque style is present both in the architecture and the decoration. Shaped as a horse shoe, the best places are right in front of the stage. Just like other great theatres in Portugal, such as Teatro de S. Carlos or the Coliseu de Lisboa. The ceiling will surprise you…

The room layout clearly shows the social differentiation which is implied in the ideia of “Italian-style theatre”. Meaning, it is organised hierarchically: first and second order boxes for the rich class; stalls for the middle class; and the upper part to the lower class. This last one entered the house of Garcia de Resende Theatre not through the main door but through the two side ones that still exist nowadays.

After your visit… relax on the nice terrace next to the theatre, where, in the summer, there is a gentle fresh breeze contrasting the hot nights in Evora, Alentejo. Whether it’s hot or cold, have a drink in the pub/terrace if you want to try the nightlife in Evora.

Or, if you prefer, before your visit, find a good translation of “Os Maias”, the classic book by Eça de Queirós. This novelist is considered to be the greatest Portuguese writer in the realist style and, in the above mentioned book, he makes a perfect description of Garcia de Resende Theatre. Go in only after you read it!

Previous Rural tourism in Evora and Alentejo, sleeping in the countryside
Next Free WiFi areas in Evora, internet hotspots