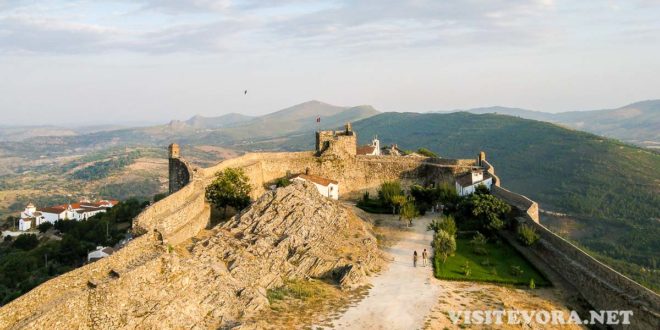 Marvao (Marvão), the “very noble and always loyal” village, got its name from Queen Maria II. It is located on Portalegre district, Alentejo. Very close to the border with Spain, on top of Sapoio Sierra, at about 2,800ft (860m) high.

Marvao and its role in the history of Portugal

Marvao was once conquered to the Moors by King Afonso Henriques. Later, in 1190, they conquered it back. But, in the year of 1226, King Sancho II gave the population one of the first royal charters in Alentejo. This was followed by the final regain of Marvao castle, three years later, in 1229.

After a few enlargements and military rebuilding, the fortification gained great importance in the future wars with Castilians and, later, Spaniards. Of these reconstructions, the highlights are the donjon and the new set of walls. Marvao castle had other changes and extensions made in the 16th, 17th and 18th centuries. Today, it is considered a medieval national monument in Portugal. For all these reasons, we can’t miss it when we visit Alentejo.

The village of Marvao and the territory around it, namely the craggy mountains to which it clings, are of an almost primitive beauty. From early times, these mountains were used as a refuge or as a strategic military point, since the Roman period.

The most ancient historical remains date back to Palaeolithic and Neolithic times and are exhibited in the Museu Municipal (Museu Municipal). Here, we can see several menhirs, dolmens and a Roman fountain, proving the resistance to the passing of ages, which was not always easy.

Because it lies further up in Serra de S. Mamede, the village of Marvao doesn’t have the easiest access. This represented a great advantage in the past, since the natural protection acted against the enemies. Defensive reasons were, of course, at the root of its birth.

Marvao was the only Portuguese fortification with a strategic purpose until the 19th century. It was part of the first defensive line of the territory and it is still the richest in historical and military heritage. Here, people fought and won battles as well as political fights against their external opponents.

South of Marvao Castle slope, in the centre of Parque Natural da Serra de S. Mamede, we can see the ruins of the Roman city Ammaia. Builders took many stones from the ruins to the construction of Marvao walls and other edifications. Old and abandoned, above ground, only a few walls were left standing because their materials were not important.

Legend says that dirt swallowed Ammaia after an earthquake. But this is only one of the many stories told to justify the disappearance of the city. Anyway, what is left of it, the ruins and the museum, deserve our visit. After being studied and identified, these ruins were considered a National Monument in 1949. One more reason to visit Marvao.

In Marvao Castle, the 13th and 17th century walls protect the village and embrace the houses inside. Raised up high, it shows itself to everybody with its winding narrow streets. And houses painted white, Alentejo style.

The walls in Marvao are a monument that we won’t forget for their greatness but the village is not just all about them. Marvao is also history in the 15th-century Igreja Matriz and the old Igreja de Santa Maria (churches). Today, the last one has become the above mentioned Municipal Museum, which you can visit to admire local ethnological and archeological collections, as well as remains of thousands of years of people living here.

There is also history beyond the defensive walls, in Igreja do Espírito Santo and Convento de Nossa Senhora da Estrela (convent). This last building has the name of the patron saint of Marvao, believed to be a miracle maker and protector. The popular annual village festivities, known throughout the region, are dedicated to her.

Igreja do Espírito Santo (church) has a Renaissance facade and portal. On the opening, there is an stone image of the Virgin Mother. Inside, we find only one nave, with a pulpit and a carved altar.

Other churches await our visit. Among them, Igreja de São Tiago, the 14th-century parish headquarters in Gothic style. The simplicity of the portal is finished by a cross from the Order of Malta. Inside, we can see three naves, where the altarpiece from the main chapel replaced the old gilded altarpiece.

Marvao municipality heritage is surely rich. So, there are more monuments to see other than the ones already mentioned. We can also find the following places of tourist interest:

After the monuments and other places of interest, for people who come and stay for a while, Marvao offers numerous routes to explore walking or biking. Perfect for people wishing to get in contact with nature and for the most energetic ones. When we visit Portagem, a picturesque village by the Sever River, we can dive on a pool or, even more enjoyable, on a river beach.

After a relaxation time, comes the pleasure of a nice typical meal with kid, lamb or codfish as main ingredients. For visitors who have a sweet tooth, the emphasis go to convent sweets or those made with local products, especially chestnuts. Make no mistake… Alentejo cuisine is incredible!

Feira da Castanha (Chestnut Fair), on the second weekend of November, is one of the biggest tourist attractions in Marvao. Among other activities, we can spend some time on the cultural events or visit the chestnut, honey, liquor and nut markets. During the summer months come the festivities and pilgrimages of the municipality villages, as well as the kermesses, several shows and popular balls.

What about the scenery? Well, stunning, we already know it. There are a few different natural habitats because Marvao is on the heart of Serra de S. Mamede. The cultivated lands, combined with the scarps and woods, allow the creation of exceptional conditions for many animal species.

In addition, the geological diversity of the region (granite, limestone, quartzite, schist,…) in harmony with the altitude and the rugged terrain, makes it easy for the growth of a rich and diversified flora.

Marvao truly represents history. A visit to this gorgeous village takes us back in time. The historic traces are visible everywhere. All the time. Gothic, Manueline and Medieval evidences are forever engraved on the local granite.

Choose your accommodation from this list of hotels in Marvao

The village and Marvao Castle “happen” slowly. Maybe time runs slower here. Or life isn’t in a hurry like in many other places. As for the environment, it is full of harmony and tranquility. Are there better reasons to visit Marvao? In Alentejo, we await your visit. If not today, tomorrow or later. But we are certain you will come!

Tags History Monuments nature Routes What to do