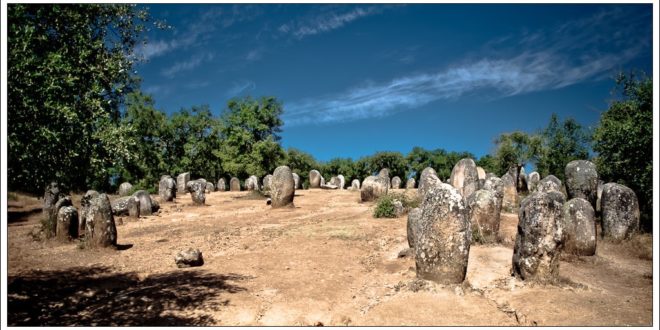 There are many megalithic monuments on the outskirts of Evora and throughout central Alentejo. This prehistoric riches in Alentejo is one of the most important in the Iberian Peninsula and even in Europe. So, it makes sense to talk about a Megalithic Circuit in Evora and consider this city as the capital of Iberian megalithic.

After you quietly sleep in a hotel in Evora, go for a drive through the fields around the city and discover some of the oldest monuments in Europe, up until Early Neolithic (5500-4500 BC).

In Evora district alone, more than 10 megalithic enclosures, more than 100 isolated menhirs, about 800 dolmens and close to 450 megalithic settlements. In addition to these, there are about 100 rocks with dimples (their functionality is still a mystery).

Why so many megalithic monuments in Evora?

The size and number of megalithic monuments in Evora are associated with the fact that this region is the only place where the hydrographical basins of Tagus, Sado and Guadiana touch each other (these are the longest rivers in the south of Portugal). That is why the region was an essential crossing point.

The megalithic monuments (made up with big rocks) were then placed in Evora region because the plains in Alentejo were perfect for the last communities of hunter-gatherers to practise their way of living.

But the location of the prehistoric monuments, such as the Almendres Cromlech, was chosen not only because of the water network. It also took into account astronomical phenomena related with the annual movement of Sun and Moon.

Among many other megalithic monuments around Evora, a few stand out for their importance and greatness.

The Almendres Megalithic settlement (or cromlech) is the biggest megalithic monument in the Iberian Peninsula and one of the oldest in the world. Everybody has heard about the grand Stonehenge, in Britain… The Almendres monument is 2000 years older! It was built about 7000 years ago, when mankind in Western Europe was making the transition from hunter-gatherers to herders and farmers.

Nowadays, Almendres Cromlech, very close to Evora, has approximately 100 monoliths. Throughout the ages, there has been some remodelling and adding to the original horseshoe shaped blueprint.

It is extremely easy to find if you follow the road signs from the small village of Nossa Senhora de Guadalupe. The place is very quiet and beautiful, surrounded by oak tree forests. Have a picnic close by an enjoy the view over Evora. Don’t forget to respect the location, which has a striking magical aura.

The menhir in Monte dos Almendres is one of the many menhirs in Evora region. It is shaped like an elongated egg and has a crosier (staff) engraved in bas-relief on the top, clearly representing the importance of nature in neolithic times, especially in what the domestication of animals was concerned.

Almendres Menhir is located very close to the Almendres Cromlech and they are both intimately connected. Seen from the cromlech, the menhir indicates the sunrise in the summer solstice (the longest day of the year). Visit Evora by that time and see it yourself.

This dolmen on the outskirts of Evora, close to the small village of Valverde, is more recent than the above mentioned ones, with less than 6000 years of existence.

Anta Grande do Zambujeiro is a collective funerary monument. In other words, dolmens were used to burry the dead. In this dolmen close to Evora there is a large corridor leading to the chamber. Everything was covered by the tumulus, a protective cover, usually made with soil and rocks.

In Anta Grande do Zambujeiro you can still see the tumulus. The chamber support, with about 20ft (6m), probably make it the highest dolmen in the world. It is considered of national interest in Portugal.

To get to this monument by car you will have to drive through the Mitra section of the University of Evora and follow the signs. As an alternative, spend a nice morning or afternoon trekking or pedalling in the fields of Alentejo following the Percurso de Monfurado, one of the nature trails in Evora.

Tour suggestion
If you wish to do the Megalithic Circuit but don’t have a car or prefer to fully understand the monuments onsite, join us in our Megalithic Tour.

Alto de São Bento viewpoint is one of our visitors’ favourite places outside the historic centre. The view over the city and the plain is fantastic.

On top of this hill there were once windmills grinding cereals. Today they are deactivated but were recovered and add beauty to the place. Over 7000 years ago, in the beginning of Neolithic, this location already attracted people and allowed settlements. These are presumably the oldest origins of the city of Evora.

The megalithic settlement have the same age as the menhirs and dolmens around Evora. In fact, Alto de São Bento itself is a massive granitic rock.

Near Portas do Raimundo, in one of the gates in the ramparts of Evora, Convento dos Remédios (Remedios convent) has a space called Megalithica Ebora with exhibitions showing the Megalithic and Roman periods.

Make sure you visit it to get to know more about the Roman traces in Evora in emblematic places like the Roman Temple… and also about the Megalithic Circuit in Evora and Alentejo.

Inside this megalithic interpretive centre you will be able to see a model of the Anta Grande do Zambujeiro. The centre is open Tuesday to Saturday, 9.30-12.30 and 14.00-18.00. It is closed on Sundays, Mondays and holidays. Admission is free.

Traffic signs on the roads around Evora make it easy for you to find the several megalithic monuments in the municipality. However, here is a map to help you find them.

In Vitoria Stone Hotel, Evora, decoration and services are all inspired in Alentejo heritage. This includes, of course, the megalithic monuments and the amazing cuisine. 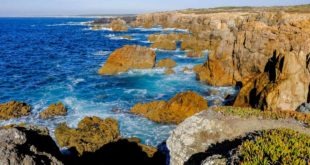