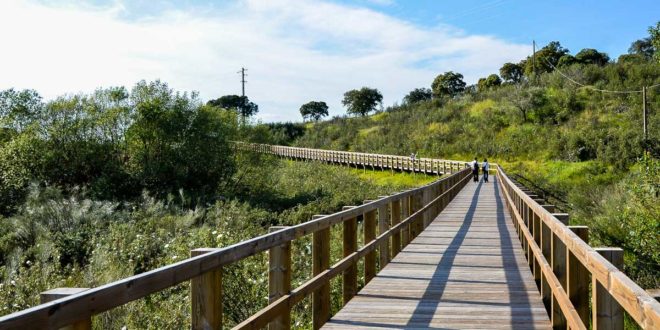 Visit Mora – a municipality that represents Alentejo so well

Mora is a beautiful small village in Alentejo like many others, located on heathlands decorated by cork oak trees. It represents the charm, peace and quiet so characteristic of these lands and, of course, Alentejo people. The municipality is divided in four charming parishes: Brotas, Cabeção, Mora and Pavia.

The name of the village first appeared in 1293 on a document named “Livro III das Composições” (Book 3 of Compositions), in reference to the farmstead “Cabeça de Mora” (Mora Head). The term “Mora” has to do with “height” or “elevated part”. Experts say that Largo do Calvário (Calvary Square) was probably the birthplace of Mora village.

To get to know Mora municipality even better, we need to visit all its parishes. One by one.

You are going to love nature in this area of Alentejo. Go for a dive on the clean waters of Praia Fluvial do Parque Ecológico do Gameiro (Fluvial Beach of Gameiro Ecological Park). You will find it on a small dam with the same name, in Cabeção parish. Don’t forget your towel and a small snack.

On Gameiro Ecological Park, only 3.1mi (5km) away from Mora, it’s difficult to run out of activities. If you love camping, you can do it on the campsite, right next to the river beach. We are certain you won’t have to deal with traffic jams, the beach won’t be full, the water temperature will be perfect. And the children, if you have them with you, can play on the playground. If they can’t ever get tired, take them to Parque Arborismo (Tree Climbing Park), dedicated to these extreme activities for the children. Before or after, explore the riverside hiking the wooden walkway along its 0.93mi (1.5km).

Still inside Parque Ecológico do Gameiro, one more attraction: Fluviário de Mora. This kind of freshwater Oceanarium has several aquariums and different spaces. The ideal place to recreate the ecosystem of Portuguese rivers, with the several fish species that live in them. This aquarium is the first structure of this kind in Europe and the third in the whole world. A great reason to visit Mora. It will surely please adults and kids alike.

Only 9.5mi (15km) from Mora, the village of Pavia is a place to see. Populated since pre-history, it is home to around 200 megalithic monuments. Pavia Dolmen (3rd or 4th millennium BC), transformed into Capela de São Dinis (chapel) in the 17th century, is the village trade mark. It is one of the most important dolmens in Portugal and one of the biggest in the Iberian Peninsula. Its three vertical monoliths make the walls and the roof slab is the ceiling. The altar is covered with Lisbon tiles tiles from the 18th centuries (have you seen our Day trips from Lisbon?. In Pavia, also visit the Igreja Matriz (main church), built in the 16th century and dedicated to Saint Paul.

Brotas is worthy of your visit too. Located around 6.2mi (10km) away from Mora, this small peaceful village has an unusual beauty and a respectful architectural heritage. Its white houses are laid like an amphitheatre on the village slopes.

Standing out from the rest of the patrimony, the Santuário de Nossa Senhora de Brotas (sanctuary), was built in memory of a miraculous apparition to a herder and his cow. It is a temple with clearly popular characteristics, as well as Manueline and Baroque ones.

In the 17th century, its interior was covered with tiles and the facade remodelled. In mid-18th century, the bell tower was restored and new tiles set. Classified as a National Monument in 1956, its reconstruction started in the following year. Works restarted in late 20th century and, in the beginning of the 21st, the tiles were finally restored. In the sanctuary you can find paintings, sculptures and a collection of Our Lady of Brotas procession costumes with gold embroidery. One more good reason to come to Mora municipality.

Framing the sanctuary, you will find the Barroca de Nossa Senhora das Brotas, a corridor of houses called Casas de Confraria (Brotherhood Houses). They belonged to several brotherhoods and used to shelter pilgrims who visited the Santuário de Nossa Senhora de Brotas. Nowadays, you can still see, in each of the houses, the headstones with the names of the brotherhoods to which they belonged. Today, they have become Casas de Romaria, used for rural tourism. Here, you can enjoy the quietness of the village to rest from all the activities you try in the region.

Further away from Mora but still close to Brotas, there’s the old Vila das Águias (Eagles Village), where you can see the imposing “Torre das Águias” (Eagles Tower), another National Monument in Portugal. Its construction started in 1520 during the reign of king Manuel I, apparently, on top of a previous structure. The construction follows the model of tower-houses. Of civil and military architecture, this tower is one of the most important Manueline towers in the region.

When you go for a walk in Mora, you can start by the Torre do Relógio (Clock Tower), around which the development of the village started. Visit Igreja Matriz de Nossa Senhora da Graça (a church from the 16th/17th centuries) and contemplate the neoclassical elements added after the restoration.

Keep going and stop by Igreja da Misericórdia, a 15th century church. Here, you will find one of the oldest bells in Portugal (14th century), which came from Convento de São Bento de Cástris, a convent in Evora. Head to Ermida de Santo António, once a pilgrimage chapel, and admire the rich architecture in the interior and the simplicity of the outer facade. On the outskirts, don’t forget to see Mora Cromlech, a magnificent prehistoric finding with six oval-shaped monoliths still standing in a horseshoe layout.

To take this kind of food to the next level, drinking is of great importance around Mora. So, our suggestion is that you choose an excellent Alentejo wine. It won’t be hard to find one from Alentejo in general but the wines from Cabeção are the most famous in this municipality. Maybe because they are made using the ancient ways, in clay pots, some of them from the 15th and the 16th centuries.

The festivities in the area also invite you to drop by. If you are into fishing related events, come in February, during the Feira Nacional de Artigos de Pesca Desportiva. ExpoMora, the village annual fair, is in September. If you appreciate good Alentejo style food, don’t miss Mostra Gastronómica da Caça (Hunting Dishes Gastronomic Show), in December.

Whatever you like doing, Mora has many choices. You can go trekking to enjoy the quiet moments around the stunning surrounding nature. Without haste, cycle in places where time stops. Another rewarding activity is birdwatching. Find species like Herons, Red Kites, Kingfishers or other less common but equally spectacular such as the Black Stork or the Black Vulture. Be in permanent contact with the fauna and the flora.

In Mora, we find one of the best fishing trails in the world. And the municipality has two! Pista Internacional de Pesca Desportiva de Mora (Mora Sport Fishing International Trail) covers 0.62mi (1km) and has the capacity to hold 60 fishing spots. Pista Internacional de Pesca Desportiva de Cabeção (Cabeção Sport Fishing International Trail), in Ribeira do Raia, is 1.86mi (3km) long and a capacity to have 190 fishing spots.

If you know this art, take your time to fish the many species that live in these waters: carp, barbel, bogue, perch, eel, catfish. The conditions in the territory, the beauty of its landscape and its infrastructures have already given Mora the honour to host sports events of national and international importance. Including Junior and Senior world championships.

As you can see, Mora points of interest aren’t only in the village. To visit the whole municipality represents an opportunity for you and your family. Take it! Bring the fishing rod and the right outfit to go on any activity. Or simply bring a blanket and a picnic basket to relax in between walks under the watchful eye of Mother Nature.

The water from the rivers, streams and small lakes in the municipality, the dolmens and prehistoric remains, the cork oak trees and olive trees rooted on Alentejo grounds will take you on a memorable trip. Everything on a territory with lots to explore. This is a trip through a rural and timeless Alentejo.

Tags nature Routes Visit Alentejo What to do