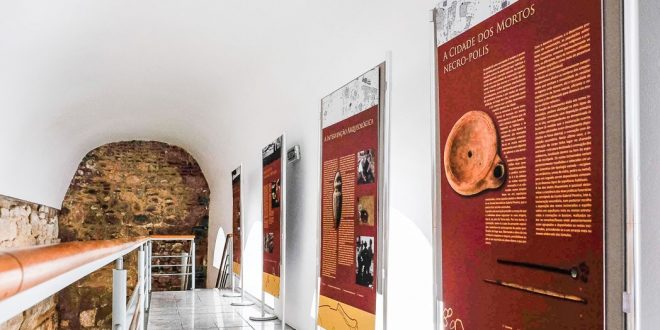 Finding Roman remains in Evora is not something that surprises our visitors. Did you know that, during the romanisation era in the Iberian Peninsula, the whole Alentejo region was of vital importance to Rome? The city of Evora quickly got the attention of the Roman troops for its privileged location.

Alentejo was a rich source of wheat, a fundamental cereal for Rome. Panem et circenses (bread and circus) is a Roman saying that really expresses the two ways the emperors had to please and control their subjects at the time.

Alentejo wheat, plenty and tasty, became the vital link in the pacification of the Roman people during the several romanisation centuries in Lusitania. It was so essential that, when Evora was elevated to municipium, already during Pax Romana, in the 1st century of the Roman era, Emperor Julius Caesar himself named it Ebora Liberalitas Julia – Evora, the Liberty of Julius (Caesar). Roman remains in Evora? Of course!

The Romans completely dominated the Iberian Peninsula until the 3rd century AD, leaving their influence well present on roads, buildings and mostly on the Portuguese language (of Latin origin). The Roman heritage is undeniable and Evora is a city where extraordinary beautiful Roman remains are a testimony from the past.

Also popularly known as Templo de Diana (Diana Temple), it was probably a place of worship to the Roman emperor of the time it was built. Located on the once Roman Forum of Evora and built in the beginning of the 1st century AD, this pagan monument of imposing proportions suffered different alterations during the Barbarian invasions and the Christian period. They all changed its main features. The majestic temple was only restored to its original glory in the 19th century.

Evora Roman Temple escaped a complete demolition during the Christian era because it worked as a butcher’s. During the romanisation and in certain temples, there were animal sacrifices in honour of the emperor, since blood was seen as a miracle element.

The substancial amount of meat left from the sacrifices was then sold to the people. When the Roman religion was replaced by the Christian one, animal sacrifices ended. But the temple kept on being the butcher’s for the population of Evora, which can maybe explain its resilience until today.

Excavations made during the 20th century in the area of the temple revealed remains of a magnificent water surface surrounding it and of a portico for Evora Forum.

One of the main Portuguese museums, Evora Museum has numerous remains of the Roman heritage. From its collections, we point out the statue of Silenus, discovered in the Convent of Loios. This indicates that a still undiscovered theatre could have existed.

The museum also exhibits a fragment of a recently found Roman Temple statue, a feminine hand holding a piece of fruit, symbolising the agricultural importance of Evora to the Romans. Evora Museum itself was built on the old Episcopal Palace, constructed over the Roman Forum, next to Evora Cathedral.

The original Roman wall, dating back to the 3rd century and built during the fortification of the city, surrounded an area of approximately 25 acres (10 hectares) and was almost 1.24 miles (2 km) long. Evora wall was protected by strong stonework towers, like the ones which defended the door on Rua da Selaria (today 5 de outubro street) and Porta de Moura (door).

Queen Isabel Door, or Evora Roman Arch, was part of the Roman wall and is constituted by a perfect stonework arch. Under the arch, there is still a section of the Cardo Máximo road, one of the main streets of the ancestral Roman city.

Also laid on the Old Wall, we have Casa de Burgos (Burgos House), where we can find a domus romana underground, connected to Alcárcova de Cima Street. Today, this building is home of the Direção Regional de Cultura do Alentejo (Alentejo Regional Culture Direction). It is perfectly possible to get in, go down to the Roman remains of Evora that are there but also go up to the terrace for a fantastic view over the city roofs.

Found during construction works made at the Paço do Conselho (Evora Town Hall), in 1987, the roman baths were probably built between the 2nd and 3rd centuries. With an area of around 3229 ft2 (300 m2), Evora Roman Baths have three well-defined spaces:

Praefurnium: room that you can visit, where the furnace was located, used to provide central heating to the other rooms, including the Laconicum;

Natatio: space not visitable, this was the outdoor rectangular pool where the waters from the spa were thrown, brought by its own aqueduct, possibly the predecessor of the famous Silver Water Aqueduct.

Before its destruction, in 1570, there was a Roman arch with three triumphal arches, niches and statues. It was located on the top north of Giraldo Square, in front of Santo Antão Church.

Archeologists and Historians believe that the frieze you can see on Evora Museum, which decorated the walls of the old City Hall building for centuries, could be part of this monumental Roman arch. The two statues of the Fonte dos Leões (Fountain of Lions) are also associated to these Roman remains in Evora.

The archeological ensemble of Tourega, between Evora and Alcáçovas, is composed by the spa in the Roman Villa, occupied since mid-1st century until the 4th century. With a total area of about 5,380 sq2 (500 m2), this thermal complex had rooms and tanks for hot and cold baths, their furnaces and heating systems, as well as a huge water reservoir. The existence of two distinct heated areas, used simultaneously, indicates that these was a double spa, with separate areas for men and women.

Roman influence largely shaped the character of who we are today as a people in Portugal. Evora is a living example of that unforgettable time. But Evora is not all about the monuments. Evora is history, it is beauty, it is culture and art that breathe every time you take a step on its cobbled streets and squares. The city of ancient walls awaits you with open arms. Come meet her!

We recommend In Acqua Veritas Spa

Live unique experiences in Evora! Discover the secrets of the relaxing and invigorating effects in 3 pools with different temperatures in the Roman baths. The perfect environment to enjoy a massage after your exploration of Alentejo – In Acqua Veritas Spa.
25 Shares
Share20
Tweet
Pin5
Share

Tags History Monuments Routes What to do