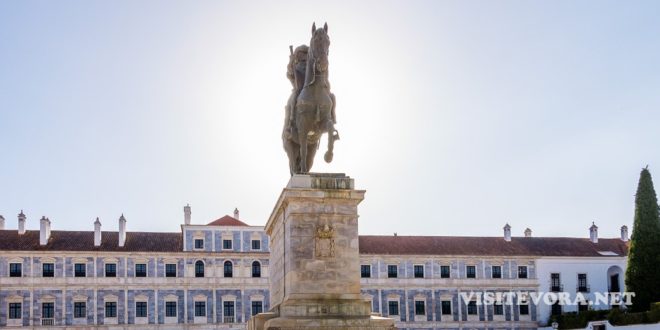 Vila Viçosa is known as the “Princess of Alentejo”, Portugal. Although small, this is one of the most precious and charming jewels of Alentejo. The village is truly an open-air museum.

The name Vila Viçosa (lush village) is due to the fertility of the soils and the charming territory. This village in Alentejo Portugal is Florbela Espanca’s hometown, one of the country’s most notorious poetesses. The author has written extraordinary works of art of Portugal’s literature. She was also a pioneer in the feminist movement in the nation. So, she was extremely important to make the Portuguese aware of the name of the village, unknown before her time.

With a rich heritage created by Man throughout the centuries, Vila Viçosa is full of history. However, Nature was and still is the provider of the raw material with which multiple decorative pieces made of rock are created. The highlight goes to marble, a fundamental part in the economy of the whole county. Today and for a long time.

The marble in the region is of superior quality and known worldwide. It is plenty in the region and comes out from around 160 quarries. One of the first places to visit in Vila Viçosa should, of course, be one of these quarries. This way you will understand how such rock is in the raw and how much work it takes for it to become beautiful and gain shape. But first let’s find out the origin of the village.

Here at the magnificent Vila Viçosa, history is made of stories told by churches, convents, palaces, museums and the very streets and people. And, in fact, there were a lot of very important moments happening here, not just to the whole county but also to the history of Portugal.

First of all, throughout the times, Vila Viçosa was occupied by Romans and Muslims, among others. Conquered in 1217 during the reign of King Afonso II, it receives its charter from King Afonso III in 1270, giving it the category of village. In the 14th century, King Dinis ordered the construction of the Castle of Vila Viçosa.

In the 15th century (1461), the village starts belonging to the House of the Duke of Bragança. Duke Jaime I of Bragança orders the construction of the Ducal Palace of Vila Viçosa in 1502, this being the most emblematic monument today.

King João II, Duke of Bragança, accepts the throne of Portugal in 1640, becoming King João IV and initiating the Bragança Dynasty. From here forth, Vila Viçosa started being the royal residence during the holidays.

In 1646, King João IV offered the Portuguese crown to Our Lady of Immaculate Conception to thank Her for the victory in the Portuguese Restoration War. So, the Saint became Queen and Patroness of Portugal. No other king wore the crown from this date.

The life of Vila Viçosa in the 18th century was also shaken by the 1755 Earthquake. In the beginning of the 19th century, it was looted during the French Invasions.

In 1910, with the Proclamation of the Republic, Vila Viçosa fell into decline, mostly because the Republicans wanted to push away all the remains of the Monarchy. However, in the 1930s, Vila Viçosa was reborn due to the exploration of the marble and the opening of the Ducal Palace (Paço Ducal) to the tourists (as ordered by King Manuel II).

What to visit in Vila Viçosa

Understanding the importance of the village to Portugal throughout the times, we now easily conclude that there is much to visit in Vila Viçosa.

The Ducal Palace of Vila Viçosa… a splendid royal palace which has no match in the Portuguese architecture. That is why you must visit it. Here, you will be able to appreciate rare beauty that you will never forget. Why? Well, first because it is a building in the Mannerist style, with a 110-meter facade totally covered with marble from the region.

The second reason to visit Vila Viçosa is because it is a memorable place with more than 50 rooms open to the public. Here you will learn a lot about local and national history. On top of that, and even more importantly, you will feel part of history. Visiting Vila Viçosa Palace is like getting in a time machine. No need to set it. Just see the centuries flash in front of your eyes.

You will see outstanding collections in the different rooms you visit in Vila Viçosa Ducal Palace: painting, sculpture, furniture, tapestry, ceramics and jewellery. You will find them in the following museum areas:

After the Ducal Palace, we present you the Castle of Vila Viçosa. In the interior of the walls, at the old gothic chapel of Our Lady of the Castle (Nossa Senhora do Castelo), we come across the Sanctuary of Vila Viçosa’s Our Lady of Immaculate Conception with its original imagery. One curiosity: the rich garments belonging to queens and dames from the Royal House have been used to dress the image of the Patroness since 1820.

Nearby, in the cemetery, we can find the mortal remains of the immortal poetess Florbela Espanca. Finally, still inside Vila Viçosa Castle, the Hunting Museum (Museu da Caça) and the Archeology Museum (Museu de Arqueologia) await you.

In the Hunting Museum you will find a fantastic and rich collection which includes several species of European and Asian origin. You can still admire the different African hunting trophies and a collection of around 200 arms. This will be the highlight of the visit for lovers of the art of the hunt.

The Archeology Museum houses a rich number of pieces from different times. Among these, a valuable spoil of roman pieces found in the region stand out, together with archeological artefacts belonging to the personal collection of King Luis I.

Outside the buildings, going up the castle walls allows you to see the whole city circuit from atop. Contemplate the main square, Praça da República, full of thriving orange trees spreading their perfume through the fresh atmosphere of Vila Viçosa.

Other places to visit in Vila Viçosa

If you are now curious about the charm of Vila Viçosa, when you come, don’t forget to visit these places too.

To be able to visit everything in Vila Viçosa and its surroundings with no rush (let’s keep in mind that this is the way to do it here in Alentejo) you will have to stay for a few days. Rest with us. There will always be a lot to see and discover.

Hotel Vila Viçosa – To sleep where History was written

Where to stay in this corner of Alentejo? Well… a great unanimous suggestion would be the Pousada Convento de Vila Viçosa – D. João IV. The historic hotel is also known as Pousada do Convento das Chagas de Cristo. Without a doubt, a unique experience, a bridge between the past and the present.

Originally named Real Convento das Chagas de Cristo, and dating from the 16th century, it once belonged to the House of the Duke of Bragança. King Jaime ordered its construction in 1514 so that it would become the pantheon of the Duchesses of Bragança. This noble family was the second most powerful nobles in Portugal, the first being the Royal ones.

In 1535 it was occupied by the Poor Clares of the Nossa Senhora da Conceição de Beja Monastery. Some were young nobles, others were bastard daughters.

The convent came to be one of the most prosperous and opulent spaces of prayer of Portugal due to the many donations it received, much against the simplicity of such places.

Today, the historic hotel still preserves a lot from those times to give its visitors an environment full of traditional and sacred meanings. Consequently, we can even imagine the old legends from the times of the Poor Clares in the rooms, old cells, oratories.

Most of all, this is a place where you will take a different path everyday. And be surprised on the way to your destination, your room, a restaurant. In these routes, take your time to watch the frescoes and tiles decorating the walls.

Choose your accommodation from this list of hotels in Vila Viçosa

The quality and variety of the food in Alentejo, and in this region, can be considered art. You can’t miss it! Do you have a sweet tooth? Then, taste the confectionery from Vila Viçosa. Start with the much appreciated “Tibornas”.

In Vila Viçosa, the people will welcome you as their own. Come and explore the History on the walls and all around you.

Previous How to get to Evora, travel to Evora
Next Estremoz – visit the historic white city in Alentejo, Portugal