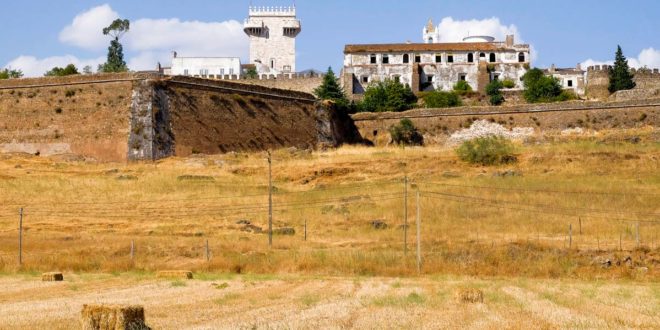 Estremoz is one of the “white cities” in Alentejo. You can recognise it from far away for its white houses, spread across a hill. They are embraced by old walls and protected by the impressive donjon. The people of Estremoz are friendly and hospitable, like everybody in Alentejo, south of Portugal.

The name “white city” comes from the colour of the houses but also from the deposits of white marble. Estremoz Marble made the city famous worldwide. The extraction of this raw material in Alentejo turned Portugal into the second largest exporter in the world. Estremoz contributes with 90% of the total. This is why you must consider a visit to one of the deposits when you come here.

Estremoz is a place of hard work in the vineyards, olive groves, marble extraction sites,… but it is also a pleasant location for visitors. It is a place of peace when we look at the never-ending planted fields. The vineyards and olive groves are set across these fields in such a symmetric and harmonious way that they remind us of the lines of a notebook. Like the ones the Portuguese take to school to write about the riches of the history of Portugal, of which Alentejo and Estremoz are proudly part.

House of many kings and queens of Portugal, especially King Dinis and Holy Queen Isabel, Estremoz has a substantial heritage. Both in terms of culture and archeology, which we can see in the many monuments spread across the city. It is one of the most important municipalities in the whole Alentejo from the historical standpoint.

The traces of human presence in Estremoz municipality go back, at least, to the Paleolithic period. Several dolmens from the Neolithic period also prove that presence. In Serra d’Ossa (sierra) there is a very relevant set of these funerary monuments.

Much later, during the occupations of the Romans and the Muslims, Estremoz already had a significant importance. And it kept it throughout the Middle Ages. As for the foundation of the municipality as such, it was made in 1258. This was when King Afonso III gave the charter to the old Celtic settlement present in the Alentejo landscape.

Estremoz was the stage of great historic events. Turned into a fortified town, it was here that numerous important battles took place. Two of them were essential for the independence of Portugal: Batalha do Ameixial and Batalha dos Montes Claros.

Estremoz – Tour guide… with room for your discoveries

After the history of the city, a (small) guided tour in Estremoz. A sort of aperitif from Visitevora to help you know Alentejo. The main course will come when you visit this place with all your senses. Yes, because this land of kings and queens is also one of good food and good wine.

We can enter the city through one of the four doors which open the castle walls: Porta de Santo António, Porta de Santa Catarina, Porta dos Currais (or de Nossa Senhora dos Mártires) and Porta de Évora (or Porta Falsa). These are medieval constructions from the 17th century made of marble from the region. They represent only some of the works of art which you can see when you visit Estremoz. Being true works of art, they are considered Monumentos de Interesse Público (Monuments of Public Interest) and it is a privilege to get lost here.

Among many other historical places to highlight in Estremoz, a visit to the following is a must.

Two well delimited areas divide the city of Estremoz. Each with a distinct beauty and charm. One of them is the lower and commercial area called “vila nova” (new village), on the flat part of town. The other one, “cidade velha” (old city), is on the top part, by the castle, where you go following the labyrinth of winding streets. Once at the summit, enjoy the pleasure of witnessing the monumental Alentejo landscape. As far as the eye can see.

Two sets of medieval walls surround the city. The first dates back to the 13th century and is around the old city. The second corresponds to the fortified walls erected to defend the lower part of Estremoz during the Portuguese Restoration War.

King Afonso III was the one who ordered the construction of the medieval wall, in 1261. The kings after him improved it, especially his son, King Dinis. This wall has two main opposing doors: Porta do Sol (Sun Door) and Porta de Santarém (Santarém Door).

Estremoz Castle is one of the trademarks of the city. It was build during the 13th century, between the reigns of King Afonso III and King Dinis. But it was only when King Sancho II ruled that the castle eventually became part of the Portuguese domain. It was also during this reign that it had reconstruction works, continued even by the following rulers.

With King Dinis, the construction of the Paço Real de Estremoz (royal palace) happened. He lived here from 1281, when he was engaged to Isabel de Aragão, who later became Holy Queen Isabel. This was their home and where the queen would die, in 1336. You will surely find the statue in her honour.

In Estremoz Castle, the impressive Torre das Três Coroas (Tower of the Three Crowns), stands out. It is considered one of the most beautiful donjons in Portugal. Made of marble, it is 28 metres high (92 ft). The castle also served as headquarters to the troops of Lord Nuno Álvares Pereira during the Battle of Atoleiros (1384), a key one to the independence of Portugal from Castela.

Between 1967 and 1969, the former Royal Palace suffered an intervention which changed its function. Today it is Pousada do Castelo de Estremoz, one of the most majestic and luxurious historic hotels in Portugal.

This hotel is a place to visit around these parts, no doubt about that! Even if you don’t sleep here, you can get in and visit the donjon. Let us spare the words we could use to describe the view. You will have to go up the stairs to see if for yourself.

Among magnificent rooms, suites and a dining room, at Pousada do Castelo de Estremoz you will also be able to savour the well-known Alentejo food. After an unforgettable meal in an unforgettable space, relax in the palace gardens of the inn, which contrast with the pool area.

Choose your accommodation from this list of hotels in Estremoz

The Capela da Rainha Santa Isabel (chapel) is located where the queen’s royal chambers were. According to some specialists, it is one of the most distinct iconographic records of the “Isabelina” tradition in Portugal. It contains one single nave. In its interior, the gorgeous tile panels stand out, as well as the oil paintings from the 18th century. They show pieces of the life and legend of the Holy Queen, especially the miracles attributed to her.

Let’s leave the top part of the city behind, the oldest, and go down the hill until the yard Rossio Marquês de Pombal. In the middle of the houses, we can see the Convento das Maltesas, or São João da Penitência (convent), a building classified as National Monument of Portugal. The spotlight here goes to the Claustro da Misericórdia (cloister), the largest of all the convents in the city. It is a building of Gothic-Manueline style with great architectural and artistic details. Nowadays, it is the Centro de Ciência Viva de Estremoz, an interactive and educational science museum where children can have a lot of fun while learning.

Close by, we find the beautiful Igreja de São Francisco (church), at the centre of Praça dos Combatentes da Grande Guerra Mundial (square). Although it was built in the 13th century, major reforms happened in the 18th century. The most noted would be the facade in Rococo style. There are three naves inside in late Romantic style.

Another important building is the Convento de Nossa Senhora da Conceição or Convento dos Congregados em Estremoz (convent), inspired in the Italian Baroque style. Its construction started in the 16th century. One of its key features is the pink marble facade, concluded only in 1967.

Inside the church we can see the set of tiles dedicated to the life and miracles of Saint Felipe Nery. With the extinction of the Religious Orders, the convent made its facilities available to the municipality and later to the Biblioteca Municipal (Public Library) and the Museu de Arte Sacra (Religious Art Museum).

The following icon of Estremoz has nothing to do with religion. Built in the 20th century (1908-1909), the building of the Café Águias d’Ouro (Golden Eagles Café) initially worked as a buffet and billiards room. In 1964, the first floor changed into a restaurant and some of the characteristic elements were lost.

Looking at this café we can easily imagine the kind of atmosphere we read about in Portuguese literature. This was truly a café for conversation gatherings in the beginning of the 20th century, part of the collective memory of those who had the privilege of hanging out inside. It is one of the few survivors of its kind and, for that reason, it was considered a building of public importance in 1997.

Still close to the Rossio, in the centre, Lago do Gadanha is another one of the ex-libris of the city. Built in 1688, it was said to be able to “quench the thirst of our entire army”. Taking in the water from the close by Fonte Nova (New Fountain), this lake fills to surround the statue of the “Gadanha”, brought from the Convento dos Congregados in mid-19th century. This statue originally represented the god Saturn, symbol of abundance. With time, it started to represent the ephemeral and how fast life goes by. Matching the lake, right next to it, we find the green Municipal Garden of Estremoz. Use it to rest after your walks.

Representing the rich Alentejo handicrafts, the famous bright colours “Bonecos de Estremoz” (pottery figures) prove that this art is also important in this city. They are an example of figurative ceramics, present in every competition and fair in Portugal.

You can find pieces in red clay, cork and leather in the traditional Saturday market, held in Largo do Rossio. You will equally find local fruit and vegetables, gastronomic spices and bric-a-brac. If you like antiques, this will be the perfect place to find them.

Eating and drinking in Estremoz

Changing the subject to talk about the memorable gastronomy in Alentejo, rich in smells and flavours, the one from Estremoz brings many visitors to the city. It will be difficult to choose!

These wonderful meals deserve to be served with an acclaimed wine. Estremoz is known for the production of Alentejo wine of excellent quality, the true nectar of the gods.

To perfectly finish a meal, we taste an incredible dessert. The sweet “Sericaia” can be better appreciated with a spectacular pennyroyal liquor.

#Alentejo fields from the tower of Estremoz historic hotel

Estremoz is really the ideal place to escape from bustling big cities. Soak yourself in the history and the quietness of a small city in the middle of an Alentejo which you will remember forever.

Visiting Alentejo in Estremoz, you will see beautiful fields covered with cork oak forest. See it up close in one of our 4×4 tours or hikes.
Learn all about cork in the amazing landscape of Serra d’Ossa and taste Alentejo wine near Estremoz.
7 Shares
Share1
Tweet
Pin6
Share